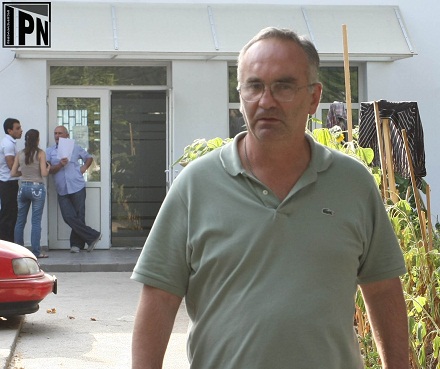 Imeda Nikuradze was sentenced to 20 days administrative detention for resisting the police during the takeover. (IPN.)

TBILISI, DFWatch – A lawyer for a company affiliated with the largest opposition bloc in Georgia has been sentenced to twenty days administrative detention for resisting police.

His lawyers say Tbilisi City Court’s decision was illegal and are going to appeal.

The company Elita Burji was recently fined for an illegal donation to President Mikheil Saakashvili’s main competitor Bidzina Ivanishvili’s political party. But the company considered the fine illegal and refused to pay, which led to the property of the company being seized and sold at an auction a few days ago.

Imeda Nikuradze, lawyer for the company, was on Monday arrested for resisting police.

Ala Kakhniauri, Nikuradze’s lawyer, says that the charge is groundless because he never resisted or interrupted the police at the premises of Elita Burji on August 6.

In addition, the lawyer says, Nikuradze’s action was legal, because law enforcement bodies were illegally on the premises of Elita Burji on August 6. Kakhniauri explains that National Enforcement Bureau employees only had a right to enter this property after the new owner of the company has been named.

“The owner was named on August 7, and after this they had a right to appeal to the National Enforcement Bureau to demand the emptying of the building. But the event in which Imeda Nikuradze was accused took place on August 6, when guard police and enforcement employees were illegally on the premises of Elita Burji, which is part of Burji Ltd.”

Imeda Nikuradze was arrested in the evening on August 7. Deputy Director of Cartu Mshenebeli Giorgi Liluashvili says that one more person was there together with Nikuradze, who says that the government representatives didn’t present documents from the Interior Ministry and ‘it may be said that the arrest of Nikuradze was in fact, kidnapping.’

In addition, Kakhniauri says that the trial was held without even informing the lawyers of the detainee.

«A second lawyer came to court for some other business and learned that in 5 minutes Nikuradze’s trial would start.”

The identity of Elita Burji’s new owner was reported only on Tuesday. Last week it became known that the property had been sold at an auction.

The new owner is Gama Ltd. This is a company which was extablished one week before the auction. Giorgi Kalashvili, Director of Gama, on July 26 applied for permission to register the new company at the Public Registry. He is a friend of Justice Minister Zurab Adeishvili.

The application was approved on August 7.

Kavlashvili says that the company participated in an online auction, where the property was presented as one lot and contained real estate assets and movable property.

Giorgi Kavlashvili explained that Gama Ltd’s bid won and on August 6 paid USD 5.4 million. Now he says that Gama is registered in the Public Registry as the owner of Burji and will exercise its rights as owner of the company.