Suspected police killer says he was pressured into confessing

Suspected police killer says he was pressured into confessing 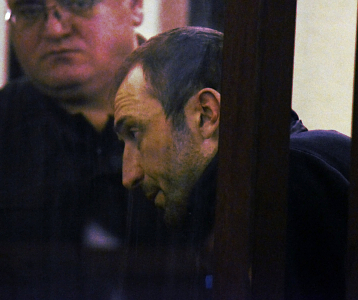 Shalva Abuladze was booked for two encounters with police, one in January and the last one on April 4, which left two policemen dead and two wounded.

He was detained April 10 in Borjomi after a nearly week-long manhunt involving three branches of the police. After first accepting responsibility for the shootings in his first court appearance, he now claims not to have carried them out, and that the real killer is still on the loose.

Abuladze was wanted for four months before he was arrested. He is charged with murder and illegally purchasing, keeping and carrying a weapon.

After seeing his client in jail on Tuesday, Abuladze’s lawyer said that the suspect has changed his opinion and now says he was subject to pressure when pleading guilty. He only admits the part of the charge about illegally purchasing, keeping and wearing a gun, but denies committing murder.

The lawyer also claims that his client is subject to physical and psychological pressure and that there should be done forensic tests.

“The accused claims that a grenade found during his arrest and a Makarov [semi-automatic pistol] belongs to him, but the other Glock type [pistol] doesn’t belong to him,” Archil Chubinidze told journalists.

Abuladze assured his lawyer that he didn’t participate in an attack on police officers in Borjomi, nor in Tbilisi, and that the real murderer is free.

The suspect has was Saturday placed in pre-trial detention.