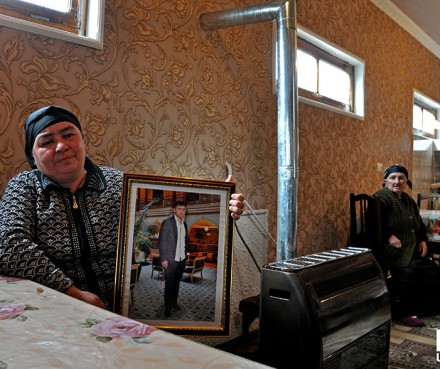 The Ministry of Internal Affairs informed said police from Isani-Samgori and together with Mtskheta-Mtianeti border police arrested Ramin Isayev in Dariali Valley, near the border with Russia.

According to MIA, Isayev pleaded guilty.

The ministry further says there was a religious motive for the confrontation in Ponichala in December during which Ramin stabbed Pikrat and the latter died from his injuries at the hospital two days later.

A video of the arrest was released.

In February, DFWatch met with the families of both the victim and the suspected murderer. We were told that Isayev managed to escape arrest and crossed the border into Azerbaijan minutes before police could catch him. Later, the police arrested an accomplice of Isayev on the border with Azerbaijan.

Pikrat Akhmedov used to attend the Shia mosque in Ponichala, while Isayev used to visit another mosque used by Salafis. They were once friends but went separate ways. Akhmedov told a TV journalist that they prayed at different mosques, which allegedly enraged Salafis.

“They told him ‘You’re a bozi’ (‘snitch’) for having given this interview,” Zarangul told DFWatch. “Later they called him and asked for a meeting. It was around noon when they visited him in the shop [where Pikrat worked] and killed him. The shop had a surveillance camera. The police showed me the recording. There is no sound, but I saw how two men came, told him something, and stabbed him twice with a knife. İsayev was my son’s friend. He used to come here every day. They used to go to the mosque together. The friendship fell apart last summer. He wouldn’t come to our house nor to our mosque anymore,” Pikrat’s mother told DFWatch.

People we met at the Salafi mosque later told us that the murder was not religiously motivated but a result of a confrontation between the two.