Students demonstrating for their rights

Students demonstrating for their rights 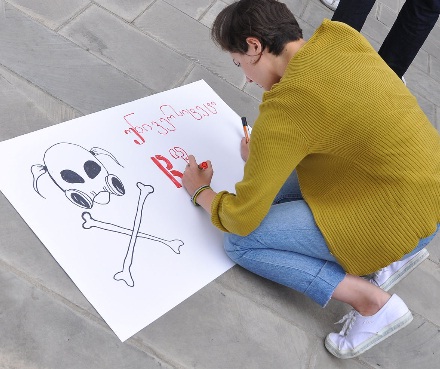 The protesting students talked with the rector Monday, but the situation was not resolved. (IPN.)

TBILISI, DFWatch – A group of university students refuses to attend lectures when the new academic year begins 17 September. They claim that the quality of education is not on the level they expect, based on how much they pay.

The student’s movement Laboratoria 1918 and other students protested against the politically motivated firing of their lecturers, and demand to change the board of regents and the dean of the social sciences faculty, who previously was deputy defense minister.

Students gathered at the building of Tbilisi State University (TSU) from morning. Rector Aleksandre Kvitashvili came to meet them and said that about basis students are right and administration is already working about this problem. He added that Andro Barnovi was invited to the university after his firing from the defense ministry and after six months it will be decided whether to Andro Barnovi will leave his position as dean or not.

Kvitashvili denied the accusation that lecturers have been fired for political reasons and said that the only reason for the dismissal of Lela Gafrindashvili was that she did not indicate her training syllabi in the application.

The students kept up their protest and shouted slogans such as “Be afraid of us” and “Return the fired lecturers”.

This meeting was held in the hall at TSU, because Aleksandre Kvitashvili refused to meet the student in the assembly hall, because of their concern.

Unlike the rector, Andro Barnovi met with students and invited them into the building to have a dialogue, but the students refused to talk with the former deputy defense minister.

Georgian Young Lawyers Association (GYLA) thinks the students’ demands are fair and expresses solidarity with Laboratoria 1918. The organization asks the interagency commission to stop the process of firing lecturers and professors for their political views. GYLA demands that the dismissed lecturers are brought back.

Laboratoria 1918 and other students do not plan to stop and they are going to gather tomorrow September 18 at the university building.