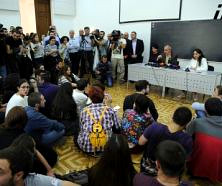 TBILISI, DFWatch–Student activists interrupted the traditional welcoming of new students at Tbilisi State University on Monday, in protest against the election of a former deputy education minister as new rector.

An activist group called Auditorium 115 prevented Giorgi Sharvashidze from holding his welcome address. The group claims that the newly elected rector did nothing to improve the situation at the university during the years he worked at the Ministry of Education.

Auditorium 115 activists broke into the TSU building and fought with security guards. Later, they discussed their demands with the TSU rector in the room called Auditorium 115, from which the group took its name.

During the meeting, Sharvashidze promised that students will participate in drawing up a strategic development plan for the university. Students presented him with their main demands and were promised that some of the issues would be discussed at a meeting of the academic council later on Monday.

Some of the issues raised by the activists of Auditorium 115 are greater university autonomy, reform of the student council system and improved living conditions in the TSU dormitory.

Sharvashidze described Auditorium 115 as a ‘non-registered NGO’ and said he thinks there are certain political interests in the current events. He claimed that many members of the activist group aren’t even students.

Auditorium 115 demanded an apology from the new rector. Sharvashidze responded that their members come from various universities and elsewhere and thus may be perceived as an NGO. Students asked him to explain which party he thought that the movement is affiliated with, otherwise he had to apologize.

Sharvashidze said that anyone can be a member of any political union and he saw one of the posters of students: “We demand education reform”.

“This message is very close to what Georgian Dream wants,” he said.

Later, a ceremony of awarding successful students was held in the hall of TSU with the minister and rector present.