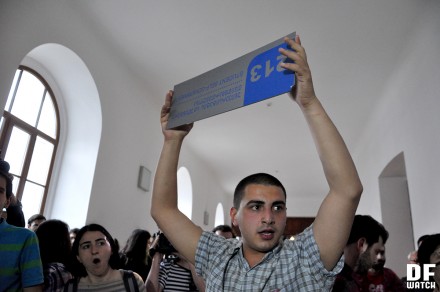 Student from Auditorium 115 holding a sign of students’ union (DFWatch)

Tbilisi, DFWatch – Auditorium 115, students’ movement at the Tbilisi State University resumed rallying against students’ union tvitmmartveloba demanding its abolishment on Wednesday, a day after one of its members was beaten allegedly by the Union members.

Auditorium 115 organized protest in the front of TSU main building and soon moved towards students’ union office in the same building. After a overcoming 20-minutes long resistance by TSU guards, Auditorium members and supporters eventually broke into Union’s office and announce its ‘abolition’.

On Tuesday Auditorium 115 raised ultimatum to the government to disband the students’ union immediately, otherwise threatening with ‘permanent’ sit-in protests.

Auditorium 115 is now waiting for government meeting planned on Friday, which will decide on norms regulating students’ unions activities. Auditorium 115 demands downright abolishment of tvitmmartvelobas in every higher educational institution in the country.

The Ministry of Education and Science responded referring to students’ ultimatum as ‘unacceptable’.

“The ministry is ready to continue the working process and invites all the interested parties to meet on May 27 at 10:00, where we would discuss achieved results and plan future steps,” the statement released by the Ministry reads.