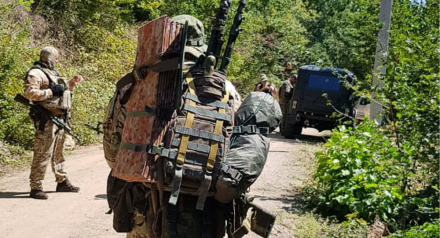 TBILISI, DFWatch–The situation along the de facto border of South Ossetia remains tense as Tskhinvali sent armed forces to prevent the construction of a police checkpoint by the Georgian side.

The checkpoint is being built in the vicinity of Georgian village Chorchana.

“In connection with the provocative attempts of the Georgian security forces to illegally put up a police checkpoint in the area of the village of Uista (Tsnelis) of the Znaursky district, and in order to ensure the safety of RSO citizens living in border settlements, the KGB combined detachment, OMON units and other structures of the republic’s law enforcement agencies have been dispatched at the scene of the incident,” South Ossetian KGB said in a press release issued on Thursday.

The de facto president of Tskhinvali, Anatoli Bibilov, visited the scene on Wednesday and pledged not to allow “violating the territory of South Ossetia”.

Georgian authorities are constructing a checkpoint at the conflict line between the Georgian settlement of Chorchana and the village Tsnelisi. The latter is inside the South Ossetian breakaway republic and the latter officially refers to it as “Uista”.

South Ossetia insists that the checkpoint is situated on their its territory, thus violating its “state border”, and accuses Georgia of staging a provocation.

The Georgian side denies the allegations.

The territory  where the checkpoint is being built is under our control, thus “we have the full right to do any works the central government deems necessary, ” said Zviad Zviadadze, representative of the Office of the State Minister for Reconciliation and Civic Equality.

Television station Pirveli reported that the European Union Monitoring Mission (EUMM) is present on the scene.

The South Ossetian foreign ministry claims there is an increased presence of Georgian servicemen along the entire length of the demarcation line. The statement demands the withdrawal of Georgian forces from Tsnelisi and threatens “all relevant countermeasures”.

“South Ossetia strongly demands all Georgian military formations be immediately withdrawn and all illegal construction be immediately stopped. Otherwise, the current Georgian government and its Western curators will bear full responsibility for all possible consequences,” the statement said.

Breakaway authorities said they notified the EUMM that there is “a real threat of a new armed conflict and further escalation of the situation”, while also criticizing the EU observer mission for demonstrating “a similar approach” as the OSCE in the period before the 2008 war.