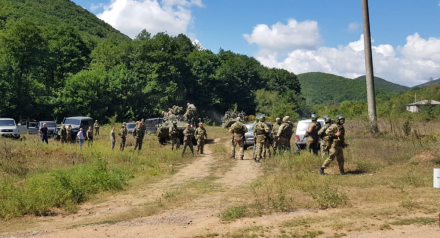 TBILISI, DFWatch–The situation along the de facto border of South Ossetia further worsened on Thursday after representative of breakaway authorities put forward an ultimatum to Georgia to dismantle a checkpoint at the village Chorchana, in Khashuri municipality.

If Georgia doesn’t dismantle the checkpoint by 6 am Friday morning, Tskhinvali authorities will “resort to all lawful measures to protect our population,” South Ossetia’s representative Egor Kochiev said after walking out of a scheduled meeting of the Incident Prevention and Response Mechanism (IPRM).

Tskhinvali asserts that the checkpoint violates South Ossetia’s “state border” and poses a threat to locals, a claim vehemently denied by the Georgian side.

Nevertheless, de facto authorities amassed armed forces close of the checkpoint, which is under construction. These, among others, include special forces of Tskhinvali KGB and OMON, a special police unit.

European Union Monitoring Mission is present on the ground.

IPRM are regular field meetings between Georgia and the breakaway authorities held on the conflict line under the auspices of EUMM and OSCE.