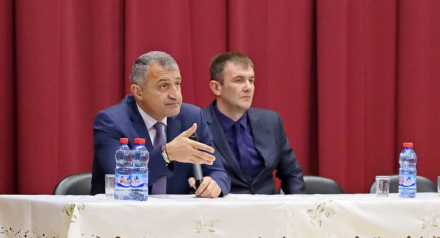 Anatoly Bibilov at the meeting with Akhalgori residents. (Photo by the de facto president’s administration.)

TBILISI, DFWatch–Tskhinvali refuses to reopen the passage to Akhalgori, a predominantly ethnic Georgian district of South Ossetia, unless Georgia disbands the checkpoint in Tsnelisi, the de facto president of the breakaway republic said on Thursday.

“You address me as the president, but the problem should not be solved by me […]. You should address the Georgian authorities and express your dissatisfaction with the closure of the road because of their reckless provocative actions, because they installed an illegal outpost in the Republic of South Ossetia,” South Ossetia de facto president Anatoly Bibilov said during a meeting with residents in Akhalgori.

The checkpoint installed by Georgian authorities last August in the vicinity of the villages of Chorchana and Tsnelisi enraged the Russia-backed de facto authorities, who retaliated by closing the only checkpoint connecting Akhalgori with Georgia proper, cutting off a mainly ethnic Georgian district which as recently as 2008 came under Tskhinvali’s control, following the Russo-Georgian war. Since then, several thousand residents who are predominantly ethnic Georgians have been in actual isolation with their family members and relatives leaving across the conflict line.

After the closure, the district, which relies heavily on products and goods delivered from Georgian-controlled territory, saw a marked deterioration in the humanitarian situation. The situation there is so dire that some locals have started talking about “a humanitarian catastrophe”.

Tskhinvali claims the Georgian checkpoint was installed on “their” territory. Officials in Tbilisi categorically deny this and insist that the police outpost at Chorchana is on the “Georgian side”.

Bibilov went further, saying that Akhalgori residents should make it clear to which country, South Ossetia or Georgia, they attach their future.

“Those who associate their future with South Ossetia must have citizenship of the republic and local pensions. Let everyone decide. And, if someone wants, he/she can permanently live in the independent Republic of South Ossetia,” Bibilov said.