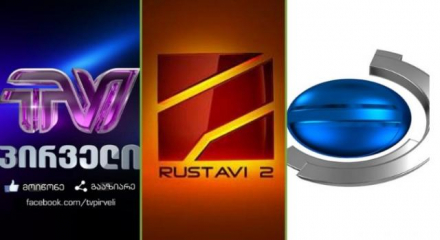 The logos of TV Pirveli, Rustavi 2 and Kavkasia.

Georgia’s opposition TV channels have slammed the financial sanctions by the government as politically motivated and vow to keep on “critical broadcasting” amid what they dub as growing pressure by Georgian Dream authorities.

On Wednesday, the Ministry of Finance seized bank accounts of and started to forcefully collect overdue taxes from private TV channels, including Rustavi 2, Kavkasia and TV Pirveli.

The punishment was a necessary measure as the channels hadn’t honored the deadlines to pay taxes, the ministry said.

Kavkasia and Pirveli are among the most critical broadcasters in the country.

They insist the state operates in double standards as “pro-governmental broadcasters”, including Imedi TV and Maestro, are not subject to similar harsh treatment. Moreover, TV Imedi has much larger debt to the budget but isn’t being targeted by the government, they claim.

The punishment will be very painful, particularly on New Year eve, they say.

The broadcasters were warned of the harsh sanctions by the ministry only a day prior, on December 23. TV Pirveli had appealed in vain to the government to extend the deadline to January 15.

“I was expecting the state to make this decision […]. This is a new storm ahead of the forthcoming elections and a new attack on the media. Let’s Imedi and Maestro pay many millions of [taxes] and then talk to us,” said Inga Grigolia, popular host of political talk shows at Pirveli.