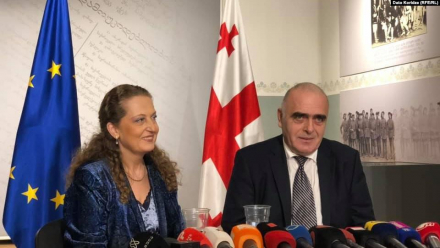 After his release on Saturday, Vazha Gaprindashvili emphasized that he has never admitted crossing the border, which is not recognized as such by Georgia.

“My position was from the first day [of captivity], and I’ve never crossed it, that I did not leave the borders of Georgia,” Gaprindashvili said. He is a prominent Georgian traumatologist.

Vazha Gaprindashvili was detained somewhere in Akhalgori district while visiting an unidentified patient in order to offer them medical treatment. The doctor has not revealed the patient’s identity in order to avoid their prosecution by breakaway authorities. He is a well-known medical doctor in the country and currently presides the Association of Orthopedists and Traumatologists of Georgia.

Later, on December 20, he was sentenced to 21 months of imprisonment for “illegal border crossing”.

The doctor’s arrest sparked a public outcry in Georgia and was followed by statements of concern by Western diplomats and partner countries.

Gaprindashvili was pardoned by the de facto president, Anatoli Bibilov, and released from captivity on December 28.

The details of the doctor’s release are still unclear. Alliance of Patriots, a conservative political party with close links to the Kremlin, claims to have played a mediator role with Moscow which was a key factor in the process.

Meanwhile, Georgian authorities claim that the doctor’s release was the result of their efforts.

Vazha Gaprindashvili thanked everyone involved in his release. He also expressed his gratitude to the Ossetian people, who sent him food during his captivity.

“For a month and a half I sustained due to the products sent by the Ossetian population,” he said after his release.