After ultimatum was not fulfilled by Georgia, Tskhinvali softened its tone

After ultimatum was not fulfilled by Georgia, Tskhinvali softened its tone 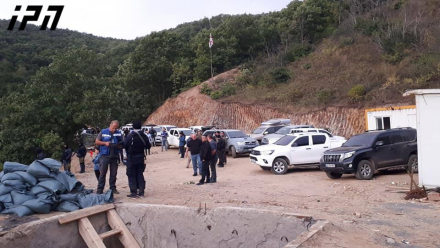 The Georgian checkpoint between the villages of Chorchana and Tsnelisi. (IPN).

TBILISI, DFWatch–South Ossetia’s ultimatum to Georgia to remove a checkpoint was not fulfilled, but the deadline passed without incident Friday.

Another meeting was held within the Incident Prevention and Response Mechanism (IPRM) in the village of Tsnelisi, and like Thursday’s meeting it ended without agreement, but the parties agreed to continue the dialogue.

Meanwhile, Tskhinvali commenced construction of its own checkpoint in front of the Georgian one in the vicinity of the village of Tsnelisi. According to de facto authorities, its aim is to protect the residents of Uista (Ossetian name of Tsnelisi).

In parallel, de facto authorities still insist on dismantling the Georgian checkpoint, and claim that it is threatening the residents of Tsnelisi and also violating their territory.

Georgia categorically denies this, saying that the issue of dismantling the checkpoint wasn’t  even discussed.

Tskhinvali had deployed KGB and OMON special forces to the area earlier in the week and Thursday issued an ultimatum to the Georgian side to dismantle the checkpoint, otherwise it would resort to all “lawful measures”. However, after the demand was not met, breakaway authorities softened the tone. They claim that there was no ultimatum and that their statements were misinterpreted by the media.

“We have one request, the Georgian checkpoint that is exacerbating the situation should be removed. The Georgian side has not agreed to concede yet,” said Murat Jioev, a spokesman for South Ossetia’s de facto president Bibilov.

“Our positions remain diametrically different. However, there were some signs at the meeting that there was a willingness to continue the dialogue in a constructive manner and to reach an agreement. Another technical meeting will be held next week,” said Irakli Antadze, head of the Analytical Department of the State Security Service, who attended the meeting in Tsnelisi.