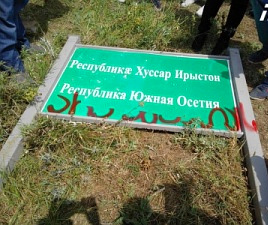 TBILISI, DFWatch–South Ossetia has initiated a criminal investigation of the journalists who recently pulled down a border sign demarcating the breakaway region and replaced it with a Georgian flag.

According to South Ossetia’s official news agency RES, the activists are under investigation by the breakaway authorities for vandalism. RES reports that de facto Security and Military Prosecutor observed the area on July 15 and discovered that a banner installed during the ‘border demarcation’ process was removed, defiled and thrown in the trash.

“They were holding Ukrainian and Georgian flags, holding provocative and uncensored banners about so-called ‘restoration of the territorial integrity of Georgia,” RES reported.

The de facto government also claims that protesters insulted the people of South Ossetia and Russia, as well as their governments.

“During the rally, a group of about 300 violated the border of the South Ossetian republic, approached the information banner placed 50 meters away from the border and dismantled it, placing a Georgian flag there instead.”

The investigative group set the banner back up beginning and removed the Georgian flags, which will be returned to Georgia at a special meeting of the Incident Prevention and Response Mechanism on Monday.

After the journalists’ protest, Georgia’s Interior Minister blocked off the area and prohibited people from entering, except locals. Later a youth organization affiliated with the National Movement attempted to hold a rally at the border, which caused a confrontation with the police, which didn’t let them approach. Several members of the group were detained.

Lawyer Levan Alapishvili told DF Watch that the Interior Ministry’s road block is illegal. He says that in order to restrict people’s free movement, there must be legitimate legal basis, and and constitutional procedures must be followed, which means that there must be announced a state of emergency or a state of war and the president has to issue a decree which parliament must approve in order for such measures to be constitutional.

The government’s opponents claim that the decision to block off the Khurvaleti area promotes Russia’s interests. A rally was held Saturday evening under the slogan ‘Stop Russia’ outside the government building in Tbilisi.