Who wants to use Tbilisi’s Atoneli residence?

Who wants to use Tbilisi’s Atoneli residence? 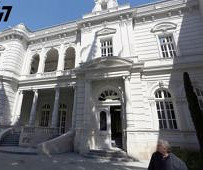 TBILISI, DFWatch–Georgia’s National Security Council (NSC) has turned down an offer to use the residence on Atoneli Street as office.

The residence used to house the U.S. embassy, but was refurbished to be used for the president’s office. This, however, was rejected by the president’s administration, and now the NSC follows suit.

“But unfortunately, after [ownership of] this building has been transferred, Irina Imerlishvili sent a rejection letter about moving into this building. The reason was that the building doesn’t comply with the necessary requirements,” Maia Tskitishvili said.

This argument seems a bit vague, she continued, because everybody knows that the building is ready, filled with furniture, and waiting to be moved into.

When the new government first began refurbishing the Atoneli residence, the idea was to use it for president’s residence, but Giorgi Margvelashvili rejected this, arguing that the infrastructure is not proper for the activities of a president.

Margvelashvili’s first bold move after assuming office was when he decided to move into the presidential palace in Avlabari, which was built by his predecessor, Mikheil Saakashvili.

After Margvelashvili refused to move into the Atoneli residence, the government considered selling the building to private interests, but later decided that it cannot be sold, because it is designed for public use.

The problem now persists, but it is unclear which government body will move in there.