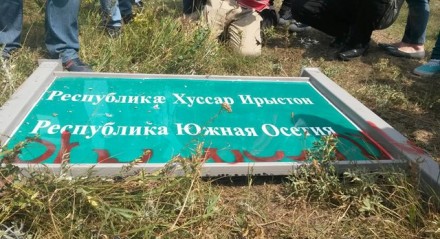 On June 10 Russian troops who guard perimeter of the breakaway republic place two news border signs near villages of Tsitelubani and Orchosani, up to 1 km inside the territory previously under control of the Georgian authorities.

Apart of several hectares of the agricultural land of local farmers, an underground portion of important Baku-Supsa pipeline operated by BP has been included inside the border infrastructure. This means that neither Georgian side nor BP staff won’t have a free access to the pipe.

The protest of over 50 journalists was conceived and planned via Facebook, the most popular social network in Georgia.

They arrived to the conflict line on three minibuses and few of them removed the bilingual border sign reading “Republic of South Ossetia” in Ossetian and Russian, painted it with text “No to occupation” in Georgian and finally threw it to trash.

No response from the Russian troops or Ossetian de facto authorities followed. They were not present on the scene at all. A journalist who was present on the scene told DFWatch that several Georgian policemen attended the event in order to ensure security. However, no one appeared from “other side” of the conflict line.