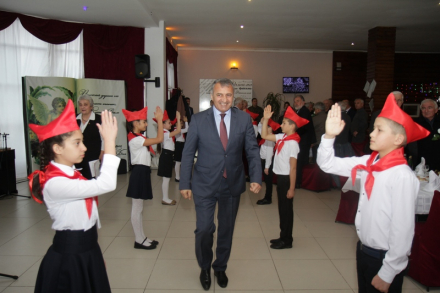 TBILISI, DFWatch–South Ossetia on Saturday celebrated the 100th anniversary of the founding of Komsomol, the infamous political youth organization during the Soviet Union.

Central in the celebrations were various events with participation by school pupils dressed in pioneer uniforms including the classic red scarves. Vladimir Lenin All-Union Pioneer Organization was the children’s political agency for children aged 8 to 14.

De facto president Anatoly Bibilov also participated in the celebration and noted with some pride that he was a Komsomol member in his youth.

Bibilov continued to say that the ideological union of youth is essential for everyone and the role of the Ossetian Komsomol is invaluable in ‘rebuilding’ the ‘republic’ after the 2008 war.

“I’m sure you will be able to do a lot for South Ossetia and its people […] The ideological basis offered by Komsomol is essential for the youth in any society, whether it is socialist, communist or capitalist,” Bibilov said.