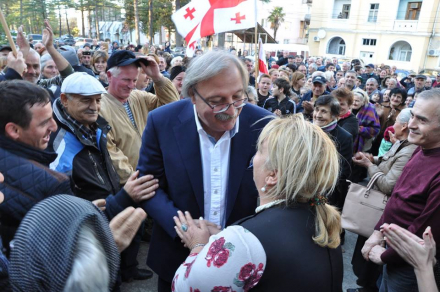 Grigol Vashadze at a meeting with supporters in Tskaltubo. (Facebook.)

TBILISI, DFWatch–The opposition candidate in Georgia’s run-off election for president pledges to eliminate the ‘political police’ if he wins.

Grigol Vashadze from the National Movement also promised to release everyone from prison who is serving time for use or possession of soft drugs and to call a snap parliamentary election.

“The first thing we should do is ensuring snap parliamentary elections according to the Constitution and Georgian legislation. Apart from a few exceptions, none of the people who are in the parliament and the government today deserve to be there,” Vashadze said on Sunday at a meeting with supporters in Kutaisi.

Many smaller political parties have thrown their support behind Vashadze, the presidential candidate for the United National Movement. Results published by Central Election Commission show that he received 37.74% of votes in the October 28 election, just 0.9% below Salome Zurabisvhili, the candidate supported by Georgian Dream.

It is essential to change the system, he said, and added that the opposition should be offered at least one ministerial seat.

In a bout of political generosity he also proposed to grant the civil society and the opposition the post of Chief Prosecutor.

“Once and for all, we will eliminate political police in Georgia. This ugly relic – the KUD, SUS, whatever you call it, is still the ‘KGB’,” he said.

Although the UNM carried out draconian measures against drug-related crime during its tenure, Vashadze promised to grant amnesty to everyone serving time for crimes related to use, possession and purchase of soft drugs. He pledged to bring in the amnesty on ‘the first day after we win’.[/fusion_text]