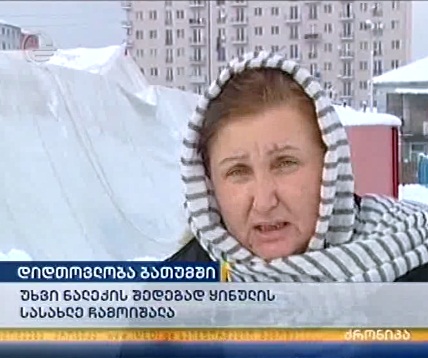 The last five days there has been an electricity problem in Batumi, in the Adjara region, as transmission lines and poles were damaged due to the amount of snow in recent days.

The frequent interruptions in power supply caused the heating system in the Ice Palace to be damaged, and as a result, the roof collapsed.

Lika Nakaidze, Vice president of Adjara figure skating federation, says that the local government didn’t provide appropriate assistance. She says they need at least 100-200 people to help them out in the clean-up work to save what’s left of the structure.

According to her it cost more than nine million lari to build the arena and it collapsed in a matter of minutes. She thinks if sufficient assistance is not provided, the arena  can’t be saved and the sport of figure skating may die out in the region.

The ice palace is able to accomodate about 2 500 people.

Interpressnews quotes Jemal Katsvadze, head of administration of the palace, saying that the repair work will cost about 20 000 lari (USD 12 000) and when the weather improves they will invite a specialist from Slovenia who constructed it.

He explained that when the heater was damaged the snow masses made the roof collapse.

Local media quotes Batumi Mayor Jemal Ananidze, who questions the responsibility of the palace administration and he doesn’t exclude dismissing them.

“The Ice Palace collapsing in two days means that there is bad management,” he said, adding that the palace administration was given a strict warning.

A few days ago, a greenhouse collapsed due to snow, causing the death of two employees and several more were injured. More than 150 000 households were left without electricity and the utility company is continuing work to restore electricity supply.