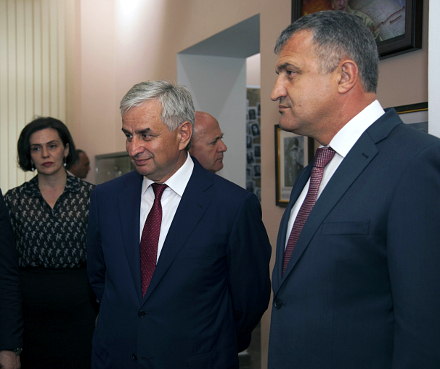 TBILISI, DFWatch–The separatists in one of Georgia’s two breakaway regions denied a report in Russian media that their leader was injured in a car crash Saturday while visiting another separatist region.

Anatoly Bibilov, the de facto president of the tiny enclave South Ossetia, was hospitalized along with two members of his security detail after being involved in a traffic accident during a visit to Abkhazia, Russian news agency Interfax reported.

The news agency based its report on a source ‘among medical circles’.

Bibilov’s injuries are not life threatening, the report further stated. Two members of his security detail have also been hospitalized and undergone surgeries.

But de facto authorities in South Ossetia denied the report. They said what happened was that a car with several members of the South Ossetian delegation veered off the road and had to undergo a medical examination. However, neither Bibilov nor any of his security detail were injured, the separatist authorities stated.

Bibilov and his entourage have now departed Abkhazia, the statement continued.

This was Anatoly Bibilov’s first ‘official’ visit to Abkhazia since winning the presidential election in April this year. He met with Abkhazia’s de facto leader, Raul Khajimba and laid down a wreath on the monument of fallen soldiers.