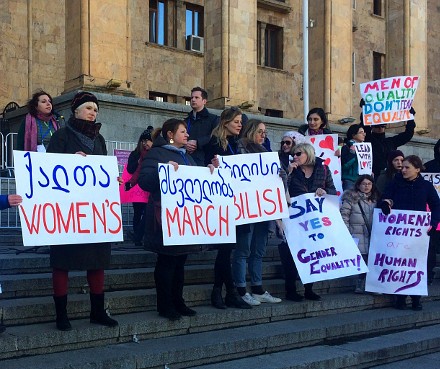 TBILISI, DFWatch–Like many other cities around the world, also Tbilisi held a women’s march on Saturday, following the inauguration of Donald Trump as new US President.

The march was aimed at raising awareness about women’s rights and other civil rights issues and started at Tbilisi Concert Hall and went down Rustaveli Avenue, to the old parliament building.

Internationally the main event was held in Washington DC, where Trump was sworn in the day before as the 45th president of the United States. Trump has been accused of making racist and sexist statements as well as hate speech.

The idea for the Women’s March started with a Facebook post by Hawaiian Teresa Shook after Trump won the election. Many organisations and individuals joined this provocative campaign from around the globe.

Organisers described the people who joined the rally as people ‘who care about human rights on the first day of the new US administration.’

“We are an informal non-partisan grassroots gathering of people who believe in equality, diversity, inclusion and justice for everyone. We come together in order to support women’s rights everywhere and to stand against the politics of fear, division, and misogyny,” Maggie Osdoby, one of the organizers of the event said.

Dodie Kharkheli, another organiser of the protest march, said she believes local communities should be interested in events in other places, because everything that happens around the world also concerns Georgia.

“The deteriorating conditions in favour of protecting women’s and minority rights around the globe further complicates the already unfavourable situation in Georgia,” Kharkheli said. She estimates the number of participants in Tbilisi to 300.

There were similar protest marches in 370 locations around the globe on Saturday.