Saakashvili announces his return to Georgia before the elections

Saakashvili announces his return to Georgia before the elections 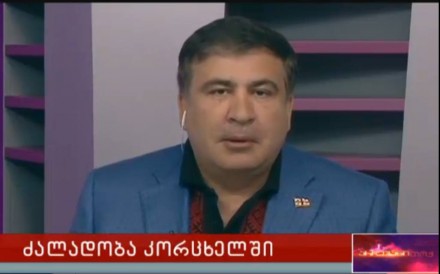 Tbilisi, DFWatch – The former president of Georgia and the current governor of Ukraine’s Odessa region, Mikheil Saakashvili declared in an interview for Rustavi 2 that he’d return to Georgia and engage in the campaign before the parliamentary elections in October.

‘No-one should doubt or see it as a threat what is a natural development. I’m planning to return to Georgia and I’m planning to be actively involved in the [political] process under the circumstances where we do a lot for Ukraine and these are for me two components of the same battle. I’m planning to continue my struggle both here in Ukraine and at home in Georgia’, Mr Saakashvili said.

Former president was put in pre-trial detention in August 2014 and hasn’t visited Georgia since November, 2013.

He denied that there was a tension within the United National Movement and confirmed that he was the party’s primary leader by virtue of being the party’s founder.

The former president also criticised the former prime minister Bidzina Ivanishvili, who is believed to exercise major influence over Georgian politics despite having formally left the scene, for the way he handled the Batumi Institute of Technology project.

‘One of the projects which I offered him [Mr Ivanishvili] very gently, yet firmly, was the University of Technology. He gave an aloof “no” for his answer. Later we found some 140 million dollars from Americans after many conversations with my friend, presidential candidate Hillary Clinton. We built this building which cost more than 100 million [dollars] and they sold it for 25 million — as flats. They ruined it. They had all the money and in September 2013 the university was supposed to receive its first Georgian students, when it had partners, teachers, accreditation, and money. Now he’s saying he’ll build it… Does he think we’re debilebi [morons]?’ Mr Saakashvili said.

He also accused Mr Ivanishvili of causing the death of the former minister of economy, Kakha Bendukidze by threatening to incarcerate him. Kakha Bendukidze died in 2014 because of heart failure.

‘He [Mr Ivanishvili] personally killed Kakha Bendukidze. I kept in touch with him until his last breath and I know for sure that Ivanishvili was telling him “I’ll put you in prison”, “I’ll put you in a 4 m² cell and I won’t even let you wash yourself”. Ivanishvili told it to him personally. I know that Kakha didn’t take it well, his nerves weren’t as strong as mine are, and the great patriot, Kakha Bendukidze, who did everything for Georgia, was led to death by Ivanishvili’, Mr Saakashvili said.

Mikheil Saakashvili in Georgia will face criminal charges over alleged “exceeding of official powers” during the November 2, 2007 demonstrations and raid on and seizure of opposition TV channel Imedi and other assets owned by his political rival, tycoon Badri patarkatsishvili.