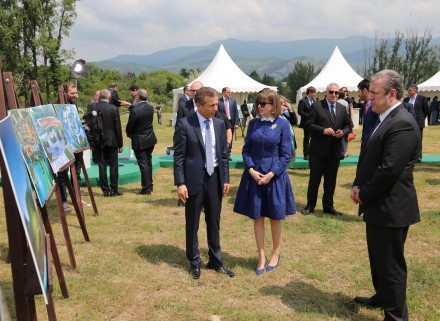 Tbilisi, DFWatch – A foundation was laid on Monday to the construction of a technologic institute, which the government vows, will be ‘the fifth largest in the world after the same kind of facilities in Italy, Switzerland, Japan, and Austria’.

While the institute is being founded by the Georgian government, but the project is being financed by the International Charity Foundation Cartu, which is affiliated to the former Prime Minister, businessman Bidzina Ivanishvili. The construction costs have been estimated at no less than several hundred million euros.

On Monday, Mr Ivanishvili and his wife attended the presentation of the project together with PM Giorgi Kvirikashvili. Some other members of the cabinet were also present at the event, as well as Georgian and foreign scientists and diplomats.

Mr Ivanishvili remarked that his aim was to help the government, assuming that the government wouldn’t be able to sustain the university on its own.

Ivanishvili said that government of Mikheil Saakashvili ‘devastated science’ and the new government now tried ‘to restore the dignity of science it had in the past’.

The businessman insisted that he had an idea to establish a technical institute eight years ago and the former President, Mikheil Saakashvili was ‘tremendously excited’ with the idea back then.

The press office of Giorgi Kvirikashvili informed through the official Facebook page that the aim of establishing a technical university was to create the Fundamental and Applied Scientific Research Complex, as well as to establish master’s and doctoral programmes in physics, chemistry, biology, mathematics, computer technology, and engineering. They also inform that the institute, apart from scientific purposes, will also serve a practical function, like providing cancer patients Hadron therapy.