Saakashvili given pre-trial detention in absentia

Saakashvili given pre-trial detention in absentia 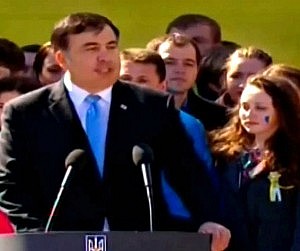 TBILISI, DFWatch–Tbilisi City Court on Friday evening decided to issue a pre-trial detention order for ex-President Mikheil Saakashvili, although he is not in Georgia at the moment.

After leaving office in November 2013, the former president has not been in Georgia.

They are charged pursuant to article 333 of the Criminal Code about abuse of powers in a case that concerns the violent dispersal of an anti-government demonstration on November 7, 2007.

Former mayor of Tbilisi Gigi Ugulava and former Interior Minister Vano Merabishvili are also charged in the same case. The latter two are currently in detention in Tbilisi on other charges.