New confrontation of TSU students amidst accusation of violence

New confrontation of TSU students amidst accusation of violence 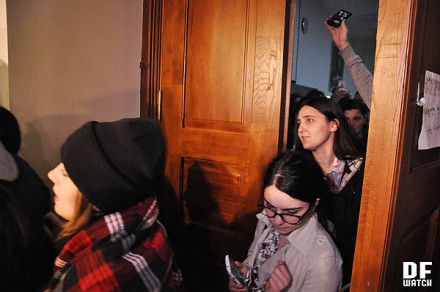 Tbilisi, DFWatch – The student movement Auditorium 115, which was set up in the beginning of March during the sit-in protests at the Tbilisi State University (TSU), informed on Tuesday evening that members of the student union tvitmmartveloba­ attacked one of its members. However, tvitmmartveloba claims it was a provocation.

Both are confident that the surveillance cameras recorded what happened in the corridor of the university, which will prove their version of the events.

Members of Auditorium 115 say that its member Tsotne Tskhvediani was in the hall when several tvitmmartveloba representatives verbally insulted him, which than escalated into a fight. They claim Tskhvediani was physically assaulted by approximately twenty people.

Paata Bakhturidze, who recently resigned from the post of deputy president of tvitmmartveloba told journalists that Tskhvediani passed by him and said something, which he didn’t hear, and saw him attempting to punch him. Bakhturidze claims that the surveillance will prove that the fight was provoked by Tskhvediani.

Later, in the midnight, Auditorium 115 members gathered at the tvitmmartveloba office doors in the TSU main building and protested throughout the night.

The group said it suspended cooperation with the government on the reform of the higher education system.

On Wednesday, the Auditorium 115 announces a rally in front of TSU main building at 6 pm with the sole demand, to abolish the tvitmmartveloba.