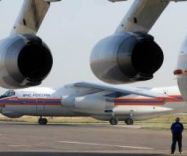 The news comes a few days after another budget airline, Wizz Air, announced its new routes out of Kutaisi.

“I hope that soon we will be able to connect this part of Europe with another,” he said.

“While we are always interested in new routes, we do not comment upon or engage in rumour or speculation,” Ronan O’Keeffe from the press office wrote us.

Minister of Economy Dimitry Kumsishvili also met O’Brien on Thursday. He said the meeting was important and expressed hope that a ‘relevant decision’ will be made soon.

In April 2015, Kvirikashvili who was economy minister at the time said that Georgia was negotiating with several airlines about new routes and named Ryanair, EasyJet, Air Berlin, and the Greek company Ellinair.

We contacted Air Berlin and EasyJet, and both companies told us they are not interested in the Georgian market.

“At this moment in time, Air Berlin does not plan to operate flights to Georgia,” Press Officer Janina Mollenhauer wrote us.

“EasyJet is constantly reviewing growth opportunity though the airlines has no plan to expand to Georgia for the moment,” EasyJet spokesperson responded.