Rustavi 2 under investigation for illegal wiretapping

Rustavi 2 under investigation for illegal wiretapping 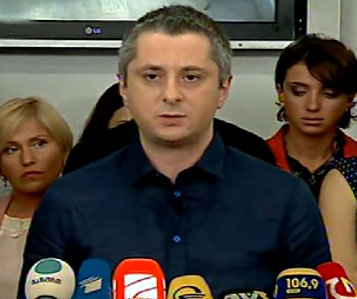 TBILISI, DFWatch–The Prosecutor’s Office in Georgia has launched an investigation into surveillance recordings published by Rustavi 2.

The case is based on suspicion that the recordings were illegally obtained and published, which if true means that the TV company violated the law. The TV company on its part accuses the government of illegal secret surveillance.

Rustavi 2, which is perceived as supportive of the former ruling party, on Saturday published phone conversations of current and former officials and several businessmen. The recordings were illegally made and the TV company’s management claims that they got them from an employee of the Interior Ministry, but refrained from identifying the person.

Before publishing the phone conversation, Nika Gvaramia, the head of Rustavi 2, said that they were informed that there was installed surveillance devices in their offices and that they were being wiretapped. After he said this, an investigation was launched and the Prosecutor’s Office searched the Rustavi 2 offices.

Two days ago, prosecutors published an interim report, which says the TV company’s head of security said surveillance devices were installed in this office during the presidency of Mikheil Saakashvili by employees of the Special Protection Service. He further claimed that Nika Gvaramia was aware of it, but Gvaramia denied this.

After the interim report was published, Gvaramia promised to make hell for the government, later explaining that he meant that the TV company would publish material which according to him was illegally recorded by the current government.

They also announced that they would show this material on Saturday during a new program anchored by Eka Kvesitadze, who until a few months ago hosted a TV show for the Public Broadcaster. She claimed that the closing of her program there had a political background.

Kvesitadze’s husband was head of the Interior Ministry’s Department for Analysis when Saakashvili was president and is still considered an associate of the former president.

Illegal wiretapping and spying was particularly a problem during Saakashvili’s government. After the change of government, thousands of illegally recorded video and audio recordings were found. The new government destroyed the recordings that were of a private nature, after Georgian NGOs and international organizations demanded it. However, there are many who suspect that illegal wiretapping is continuing. For the last year, influential NGOs have demanded legislative changes to prevent illegal wiretapping. They have sent a law proposal to parliament, but it has not been discussed yet.

Prime Minister Irakli Gharibashvili last week called the NGOs’s request a way of undermining the country and accused them of having relations with the National Movement, the former ruling party, though these NGOs started fighting against illegal wiretapping during Saakashvili.

Referring to the recordings which spawned the investigation, the Prosecutor’s Office said releasing illegally obtained footage is a crime too. But some lawyers say this prohibition does not concern the media if there is a high public interest which they claim there is in this case.

The TV company explained that they made public only the footage that did not include private situations. Rustavi 2 released audio material that show phone conversations by officials and businessmen.

“An anonymous source sent us a telephone recording, made in 2013, where David Usuphashvili, Parliament Speaker, Irakli Alasania, Minister of Defence, and Giga Bokeria, Secretary of the Security Council, and other politicians and businessmen are speaking. We released only a part of the footage, as proof that the problem of illegal wiretapping is very large-scale,” Kvesitadze said.

There is no specific information in those recording, but the fact that they have been illegally recorded would be a big problem for the government, which claims that there is no longer a wiretapping trend in Georgia.

Representatives of the government have not made any comments after the recordings were released. Some lawyers say that the material does not indicate who has made them and there should be an investigation to determine that aspect of the case.