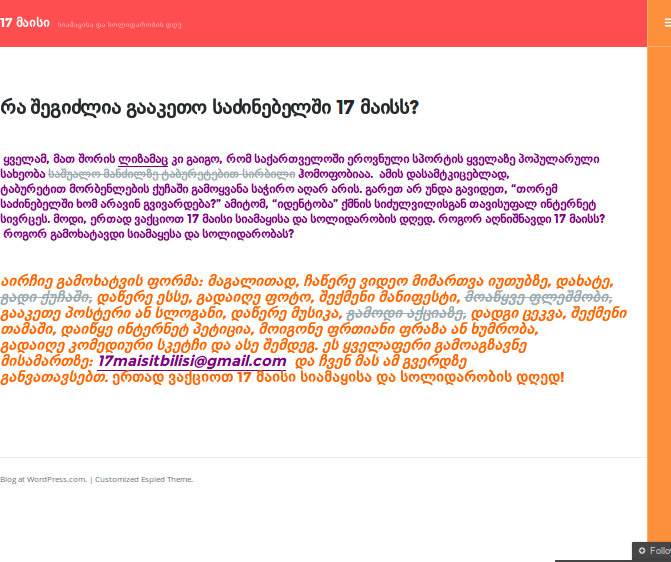 The website calls on people to find creative ways to mark the International Day Against Homophobia, May 17.

TBILISI, DFWatch–A website has been created in Georgia to mark the International Day Against Homophobia, May 17.

The website is the creation of Identoba, an organization working to promote the rights of lesbians, gays and other sexual minorities.

It was Identoba which organized the small event May 17 last year which was brutally attacked by thousands of people that had been called out by Orthodox priests. Several people were injured, including journalists.

Identoba a while ago announced that it would not try to repeat the event this year, considering what happened in 2013.

But now the new website suggests options for what people can do to mark May 17 in other ways: People can record a video address and upload it to Youtube, or paint something, write an essay, take a picture, make posters and slogans, record a song, make a game or launch an Internet petition.

Identoba says it will publish contributions on the new website:

“Let’s make May 17 a day of pride and solidarity,” the announcement reads.

This comes as a response to a decision by Patriarch Ilia II, who said on Sunday that the Georgian Orthodox Church has decided to declare May 17 a day of family values.