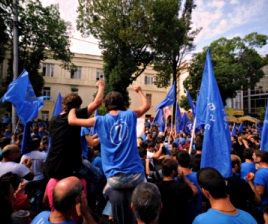 Georgian Dream activists in Tskaltubo clashed with another group of campaigners who they claim are actually from the National Movement. (Interpressnews.)

One faction of activists asked the government for help, claiming that the coalition has two headquarters in Tskhaltubo, and that the other faction actually consists of supporters of the former ruling National Movement party.

“We are the real dreamers, those are new dreamers,” one of the activist Otar Managadze told journalists. “We won’t give them a chance to bring the ‘Nationals’ [National Movement people] into government.”

The first group broke into the second one’s office and demanded to see a list of the candidates who will participate in the local election. They think there are UNM members on the list.

The same day, Georgian Dream issued a statement saying that activists who participated in this scuffle will be forced to leave the party. The statement says the coalition only has one office in Tskhaltubo and the other office is a fake meant to create problems for the coalition in the election campaign.

“Despite the attempts at provocation, we will conduct the local election in a peaceful and positive environment and we’ll go toward victory together,” the statement says.