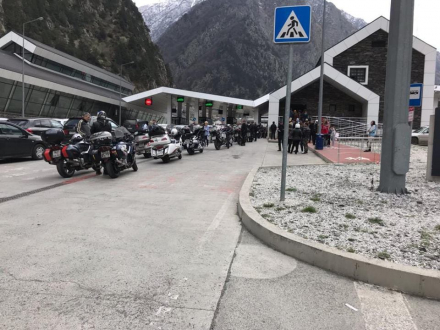 TBILISI, DFWatch–A group of Russian bikers were denied entry to Georgia on Sunday, in an incident resembling the 2017 denial of entry of the infamous Night Wolves.

The official reason for denying the bikers entry to the country is that they failed to provide information, or provided false information, about their identity and purpose of travel.

The group of about 30 were stopped at Zemo Larsi, the sole customs checkpoint between the two countries.

The bikers claim their destination was Athens, Greece, where a mass gathering is planned on Wednesday.

In recent years, pro-Putin biker gangs have traveled across former Soviet states and westward to Europe in early May to commemorate the end of World War II, in a way appearing more like overt propaganda for Russian president Vladimir Putin’s policies.

In 2017, a larger group of Russian bikers were stopped at the Georgian border. That group belonged to the notorious gang called Night Wolves, which is headed by Alexander Zaldostanov (“the Surgeon”), who claims to be a personal friend of Putin.

It is not clear whether the group stopped at Zemo Larsi on Sunday belongs to Night Wolves. The core of the group is reportedly travelling to Berlin.

The group’s entry ban will remain in force till May 10.