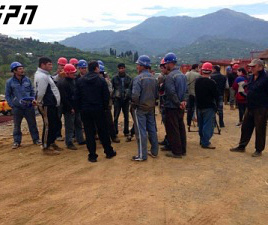 TBILISI, DFWatch–A strike has broken out among workers on a new highway connecting Tbilisi with Rustavi, a town 20km to the south. Workers demand a ten lari (USD 4) pay rise from their current 20 lari (USD 8) per day.

Their demand comes as a result of a 30 percent drop in the value of the national currency since November. At the time workers signed their contract with the Chinese company, one USD was 1.65 laris, while today one USD is now more than 2.40 laris. Despite the devaluation, salaries have remained the same.

This is the third time the workers on the Tbilisi-Rustavi highway have been on strike.

“We hope the Chinese, who are forcing us to work for coins in our own country, will be told by the government to increase our salaries,” IPN quotes one of the strikers saying.

Later today, five workers met with representatives of the company’s management, which resulted in the parties agreeing that the company will make a decision about salaries on May 20.

Guram Vakhtangishvili, deputy manager of the construction company, told journalists after the meeting that the company’s representatives will have to discuss the issue of salaries with the Municipal Development Foundation, which ordered the construction project.

If the demand is not met, the strike will continue, workers warn.

250 people are employed in the project, mostly locals. It is financed by the Asian Development Bank and government of Georgia.