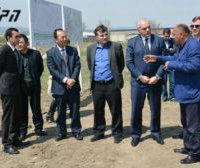 TBILISI, DFWatch–In a village just south of the Georgian capital Tbilisi, locals are protesting against a Chinese company which they claim is destroying their farm land.

Residents in Krtsanisi fear that if the company continues its work, a road leading to the village and some of the houses will be in danger.

The Chinese company Sinohydro Corporation Ltd is excavating sand from a three acre plot of land and using it for the construction of a new section of road from Tbilisi and south to Rustavi.

The company’s representatives claim they have a licence from the Environment Ministry to carry out the work, but villagers nonetheless plan to take the company to court.

If the excavation work isn’t halted, locals threaten to block the Tbilisi-Rustavi highway. They claim their lands and pastures have been destroyed by the company’s activities there during the last month.

250 people, 150 out of whom are from Rustavi, are employed in the construction of the highway. The Chinese company won a tender to carry out the construction work, which started in April 2014, and must be finished within eighteen months.

The budget for constructing the first and third section of the Tbilisi-Rustavi highway is more than 88 million laris. The project is financed by Asia Development Bank and the Georgian government.