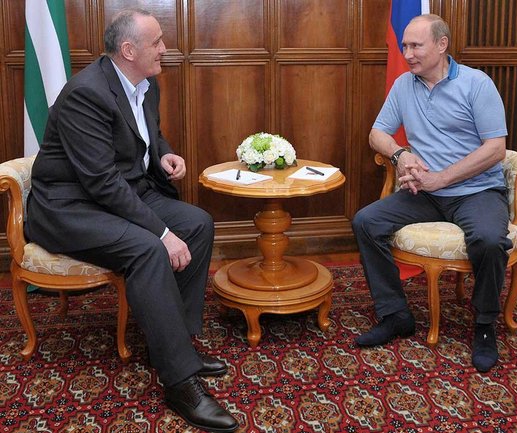 Georgia’s Foreign Affairs Ministry has sent a note of protest to Russia, which reads that Putin’s visit is another provocation.

Putin arrived in Abkhazia on Monday and met with so-called government officials. According to Russian media, he met the de-facto president in Bichvinta, which is a resort in Abkhazia.

August 26 is a public holiday in Abkhazia, and there are planned various events for the five-year anniversary.

It was on this day in 2008, two weeks after the five-day Russia-Georgia war, that Russia recognized the independence of Abkhazia and South Ossetia.

Putin and Ankvab have met twice in the last two weeks. Last time they met was in Sochi ten days ago on August 15. At that meeting they discussed assistance issues after heavy rains in July and August destroyed infrastructure and houses in Gagra and Ochamchire.

Maia Panjikidze, Minister of Foreign Affairs of Georgia, on Monday told journalists that the Georgian government has sent a note of protest to Russia through Switzerland and believes that Putin’s recent visit to Abkhazia is a provocation.

“Of course we condemn this step, as it is another violation of Georgia’s territorial integrity and sovereignty,” she said.

The National Movement party, which held power in Georgia between 2004 and 2012, called on Prime Minister Bidzina Ivanishvili and his coalition to make ‘appropriate conclusions’ at least after this development.

“The PM must acknowledge that what Russia does on the occupied territories is not inconvenience, but this is deliberate policy to ignore Georgia as a state; the whole government including its prime minister,” Davit Darchiashvili, a member of parliament from the UNM, and former chairman of the parliamentary committee for Euro-integration, told DF Watch.

He said he thinks that Putin’s step is ‘a clear message that he wants so and you must get on with it or not.’

“When he takes those steps he knows what Georgia’s reaction will be, and this is his exact message – no matter how much softer you are, I will do what I want,” he said, adding that Ivanishvili’s government have no formulated foreign political views.

Darchiashvili said he thinks that the most important for Georgia is Euro-Atlantic integration and legal and diplomatic fight regarding the occupied territories. He also criticized the Ivanishvili government for wanting to have direct dialogue with Abkhazians and Ossetians. “This political course goes nowehere,” he said.

Abkhazia is located in the northwestern part of Georgia and along with a smaller area, South Ossetia, became disputed after the breakup of the Soviet Union. Russia has intervened militarily several times, lastly in the five day war in August 2008, after which it has been occupying both areas and building military bases there. Both regions are claiming independence and are run by de facto governments. Most of the world doesn’t recognize them as independent, but regard them as integral parts of Georgia.

Over two hundred thousand people who fled from Abkhazia two decades ago are still waiting to return.