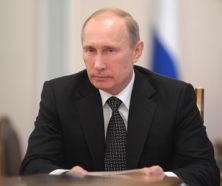 Russian media report that during his visit, Putin will meet with his Armenian counterpart Serzh Sargsyan.

There will also be held a Russia-Armenia regional forum, and the Russian leader will visit the Russian military base in Gyumri. He is also expected to sign a number of important documents.

Armenia announced September 3 that it would join the Eurasian Customs Union, a proposed free trade bloc of former Soviet republics which Putin has advocated for. EU’s foreign policy spokesperson Catherine Ashton has said for Armenia to join the Customs Union would be incompatible with the country getting a Deep and Comprehensive Free Trade Agreement with the EU.

The last time Putin visited Yerevan was in 2008.