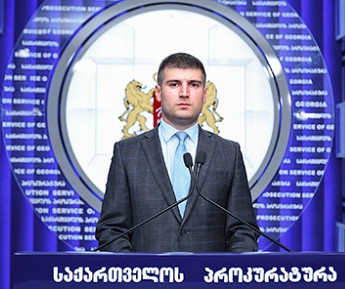 TBILISI, DFWatch–The Prosecutor’s Office of Georgia on Wednesday presented its theory of how a priest allegedly was planning to murder an adviser to Patriarch Ilia II, backing the allegations up by secretly obtained videos.

The central part of the evidence is a series of video clips secretly filmed by an informant named as Irakli Mamaladze. He is a distant relative of Giorgi Mamaladze, the archpriest who was arrested by law enforcers at Tbilisi airport on February 10 as he was preparing to leave for Berlin with sodium cyanide in his luggage.

The videos released by the POG total 17 minutes and consist of several conversations between the informant and the archpriest. The videos are accompanied by subtitles.

The POG claims that what Giorgi Mamaladze says in this videos clearly indicates that he intended to purchase potassium cyanide, but later switched to sodium cyanide. Notably, he needs cyanide before his departure to Berlin.

Patriarch Ilia II, the head of the Georgian Church, was undergoing laparoscopy to his bladder in a Berlin hospital at the time. A retinue of several top-echelon clerics accompanied him as well as Shorena Tetruashvili, his personal secretary. The latter is believed to hold a huge influence over the Patriarchy, the ruling body of the Church.

According to POG, the videos suggest that the archpriest needed cyanide for poisoning someone in Berlin.

In the videos, the archpriest says several times that he expects to be promoted in the Patriarchy after fulfilling his plan and promises the informant a good position as well. The informant is a journalist by profession and has appeared on several TV talk shows.

The exact target of the alleged murder attempt has been a matter of much speculations but officially the archpriest was charged for attempted homicide of Shorena Tetruashvili.

Lawyers representing Giorgi Mamaladze, who maintains his innocence, claim that the videos had been edited and forged.

The Holy Synod, the highest authority in the Georgian Orthodox Church, is holding an emergency meeting on Thursday, and many believe this case will be at the top of the agenda. Many observers have noted that the videos were published by POG just one day before the Synod meeting.