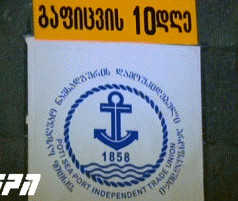 In addition, they demanded an annual award, called a ‘13th paycheck,’ and to review the content of their collective contract.

APM Terminals Poti agreed to all of their demand, except the 14 percent increase in salary. After days of negotiations between the striking workers and management an agreement was reached that salaries would increase by 5 percent.

The reason workers wanted higher salary was that the devaluation of the lari influenced their lives and they wanted a salary which corresponds to the current currency rate. Many of them have bank loans in US dollars. Georgian lari is more than 30 percent less worth compared to dollars now than in November.

The port was almost entirely shut down during the ten day strike, but workers have now returned to their duties. The port management earlier accused the workers of violating the law because they didn’t warn them about the strike in advance.