Policeman wanted in Demur Sturua case gives himself up

Policeman wanted in Demur Sturua case gives himself up 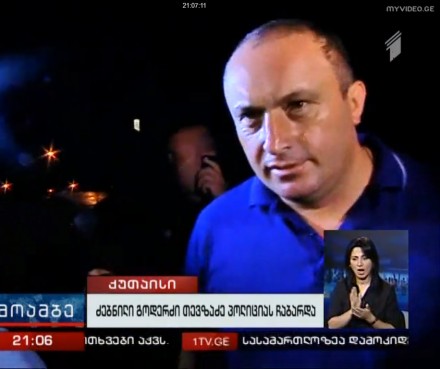 TBILISI, DFWatch–A policeman who has been wanted in connection with 22-year-old Demur Sturua’s suicide showed up at the regional prosecutor’s office in Kutaisi Tuesday night accompanied by his lawyer.

Goderdzi Tevzadze was declared wanted by the Prosecutor General’s Office three weeks ago. He is charged with bringing Sturua to the point of suicide and for exceeding his official powers. He denies guilt and vows to fight for his rights.

“You will be arrested soon, are you ready?” journalists asked him.

“I am ready, ready to fight for truth. I am totally innocent,” he said.

Journalists also asked him about a forensic examination which concluded that that the body of Demur Sturua bore signs of having been beaten. Tevzadze answered that this is a lie and the examination is wrong.

August 8, Demur Sturua was found dead with a suicide note where he wrote that Tevzadze harassed him and forced him to give information about who are cultivating marijuana in nearby villages. Tevzadze resigned and went into hiding.

The court ruled that he should be placed in pre-trial detention.

He is now at the Prosecutor’s Office for Western Georgia and will soon be moved to a detention facility.