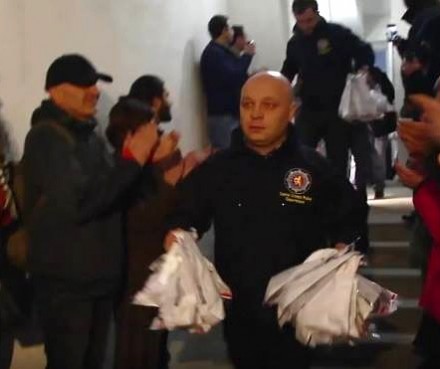 TBILISI, DFWatch–Police in the former Soviet republic Georgia entered the office of a libertarian party on Wednesday, seizing 84 cannabis plants that were planted eleven days earlier in a publicity stunt to promote the decriminalization of drugs.

The three officers spent more than four hours collecting the paper cups containing the narcotic plants that had been planted at a media event held in the party office on New Year’s Eve.

Members of the party said the police action was not unexpected; on the contrary, they practically invited law enforcement officers to visit their office earlier.

“This is the price of the action, that something like this would have consequences. Let’s see what level this absurdity will reach. I worry about the plants. I am not sure if they will take proper care on them,” Iago Khvichia, a member of the party’s political council said.

Soon after the New Year’s Eve media stunt, party activists called on authorities to hold them to account, but it took law enforcement officers eleven days to react to the open violation of Georgian law.

Zurab Japaridze, one of the leaders of the party, took a defiant position and called on the government to make a political decision to decriminalize the use of marijuana in Georgia.

“Because there shouldn’t be a difference between politicians, famous people and ordinary citizens, we urge the authorities to use their privileges and rights and prevent the criminal charges against citizens for using or keeping a small amount of marijuana,” Girchi said in a statement released on Wednesday.

Girchi’s public weed planting event on New Year’s Eve was done in order to raise awareness about the country’s harsh drug policies. The next day, police stated that an investigation was underway about offenses that are punishable by up to 12 years in prison under the Georgian criminal code.

A few days ago Japaridze named three possible scenario that may follow: The first is a  liberalization of the country’s drug policy and the campaign ending with victory. Another scenario is that members of the party are arrested, but this would speed up the process of decriminalizing drug use. The third option is that the police don’t arrest them; in which case they can’t detain others for the use and cultivation of weeds.

Under Georgia’s Criminal Code, it is illegal to purchase or keep a small amount of marijuana or its analogy or precursor for personal use or use without a doctor’s prescription. Violating the ban is punishable by a fine, or 120 to 180 hours of community labor, or imprisonment for one year.

However, the consumption of marijuana, which grows in the wild in many parts of Georgia, was not considered a criminal offense until 2006, when president Mikheil Saakashvili launched an anti-drug campaign. Between 2008 and 2013, thousands of Georgians were detained and forced to undergo drug tests.

Apart from the confiscation of marijuana plants growing in the Girchi office, the police have not made any further actions and no-one has been detained.