PDO calls for gender change in documents of trans-individuals

PDO calls for gender change in documents of trans-individuals 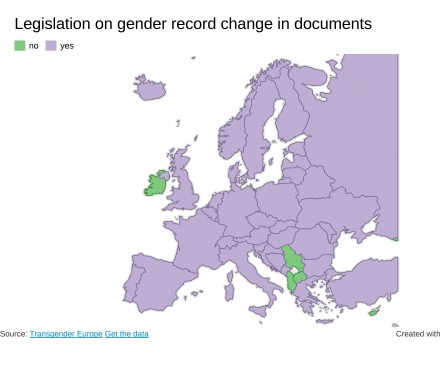 Tbilisi, DFWatch – The Public Defender’s Office (PDO) addressed the Ministry of Justice on May 18 proposing to allow trans-people to change their gender records in official documents.

According to the PDO, there are provisions in the Georgian law that hint to a possibility of changing one’s gender in official records: “The article 78 of the Law of Georgia on Civil Acts defines a list of circumstances that may become basis for introduction of change into records in civil acts. ‘Change of gender – if with regards to change of gender a person wants to change a name or/and a surname’ is indicated as one of such circumstances.”

IDs give trans-people out

However, currently there is no list of documents that a person needs to present to make such changes. Also, it is unclear what is considered as “gender change”, writes the PDO, hence it encourages to work on it by taking successful practices from abroad into account.

“Due to vagueness of the rule established by the law it is important that the issue is elaborated and adopted taking into account practices in successful countries in the sphere of obligations assumed under international agreements and gender equality,” reads the statement.

As human rights’ NGO Identoba told DFWatch, different gender record in a person’s ID singles out a trans-individual. “In a country, where transphobia is very strong and rooted, it creates problems with employment, health care etc. It makes trans people even more vulnerable,” said Levan Berianidze from Identoba.

“The key issue is work. In case trans-people documents ‘out’ them, which happens all the time, they get fired,” seconded his colleague Anna Rekhviashvili.

A majority of countries in the EU and its neighborhood allows trans-people to change their gender records in official documents (see the map). However, conditions vary from country to country and include medical diagnosis of gender disorder, medical intervention, surgical intervention, compulsory sterilization.

Last month, the Parliamentary Assembly of the Council of Europe (PACE) adopted a resolution, which, inter alia, calls for the countries to “develop quick, transparent and accessible procedures, based on self-determination, for changing the name and registered sex of transgender people on birth certificates, identity cards, passports, educational certificates and other similar documents; make these procedures available for all people who seek it, irrespective of age, medical status, financial situation or current or previous detentions.”

The PACE resolutions have no legal binding, and they are rather recommendations for all 47 countries of the Council of Europe. Georgia has 5 representatives in the PACE, but only one, Chiora Taktakishvili from the UNM, was present during the vote and supported the resolution.

Identoba to challenge the Constitutional Court

Currently, Identoba’s lawyers are preparing a case for the Constitutional Court of Georgia. They represent a trans-man, who cannot change his gender in legal documents, because he has not gone through sex-reassignment surgery. “As state fails to regulate such cases by the law, it is argued that it discriminates against trans-individuals. The case is of strategic importance. If we win, the court will require from the state to start regulating the legal gender change  procedures for trans-individuals,” explained Rekhviashvili.

According to her, trans-people are the most vulnerable LGBT group in Georgia. Gays, lesbians and bisexuals can prevent violence in their social circles by choosing not to come out, or to come out just to a selected group of their friends or family: “For transgender people coming out often is not a choice, as they are visible. Therefore trans people have problems with their families in very early age. It’s very common for families to kick out their trans children out of the house, when they have not completed education and have no resources to survive.”