Chechen who fought against Russians wounded in Tbilisi

Chechen who fought against Russians wounded in Tbilisi 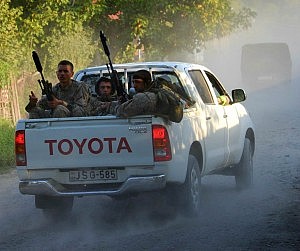 Tbilisi, DFWatch – An ethnic Kist (Chechen) from Pankisi, who is believed as being a mediator during controversial Lapankuri special operation in August, 2012, was wounded Thursday noon in Tbilisi when an unknown assailant opened fire from a car at the doorsteps of his house when he was trying to get into his vehicle.

Zelimkhan Khangoshvili, a veteran of the Chechen war with Russia, got four wounds on his hand and was moved to the Republican Hospital, according to his relatives,.

Rustavi 2 in the evening reported that Khangoshvili was registered at the hospital with a name Tornike Kavtaradze. The reason behind this behavior is still unknown.

Family members say he left apartment for ‘small business’ and they heard of shooting immediately after he stepped out the building. When they came down, Khangoshvili had already been shot.

Saikhan Muzayev, also ethnic Chechen, who used to work as interpreter at Refugee Ministry during Lapankuri operation and who in recent years accuse government for illegally prohibiting him to leave Georgia , came at the hospital to visit his friend Khangoshvili.

“There can be million versions, but I exclude relation with Lapankuri operation,” he said also adding that Khangoshvili saw the face of the assailant but couldn’t recognize.

“He didn’t have conflict with anyone, but it’s obvious someone wanted to murder him,” Muzayev said.

Family members, also elderly people in Pankisi Gorge, where the operation took place, rule out possibility that the shooting may have been related to the special operation.

Interior Ministry hasn’t issue any statement on the incident yet.

Although the new Georgian authorities pledged to properly investigate the case, yet the details of and reasons behind the incident are still obscure. Relatives of those killed, some of them Pankisi natives, as well as many Human Rights activists have expressed their dissatisfaction of the investigation lacking progress.

Zelimkhan Khangoshvili, a person allegedly with strong ties with the former government, participated in the negotiations with the insurgent during the incident.