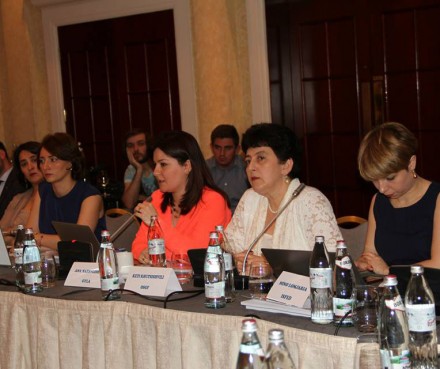 Presentation of the report at Tbilisi Marriott Hotel (GYLA)

Tbilisi, DFWatch – 15 non-government organizations prepared report about 2 years of Georgian Dream’s being in power describing progress and challenges, also main problems for the government, among which there is ‘informal governance’, the parliament failing to fulfill its function to control the government policies and also outstanding promises.

Eka Gigauri, from Transparency International Georgia and a co-author of the report section about executive and legislative governance, underlines that positive thing about the parliament is that it is more diverse than before as there are many opposition parties, but she says the challenge for parliament is that they aren’t quite capable to control the executive government, while the latest faces problem of informal governance.

The report reads that there are cases when ‘unauthorized people’ interfere into solving certain state issues, which has negative influence over healthy functioning of the democratic institutes in the country.

The government has focused to strengthen law enforcement bodies, which are not transparent and parliament failed to properly monitor them, the report continues.

Although the ‘informal governance’ is something a keynote of the report, the report does not mention the one. However, in the context of the current Georgian politics it is clear who was implied – Bidzina Ivanishvili, former PM.

Even recent public opinion polls, great amount of Georgians believe that the Bidzina Ivanishvili who stepped down from politics after about a year being a prime minister, remains a real decision-maker who actually dominates the government policies from behind the scenes.

Maya Tskitishvili, head of the Government administration, responded to these allegations denying any possibility of informal governance within the government.

“We are pretty much sure that institutes rule the country today, but not certain persons, as we had dealt with it before (during Saakashvili rule)… Of course we wish things were better, but we do not share this remark,” she said.

A short conclusion of the report reads that two years of rule of the Georgian Dream makes it clear that private and public sectors are more pluralistic and free than they used to be was in the final years of previous government, but despite progress there are many challenges.