One man dies in accident at Zestaponi metal plant

One man dies in accident at Zestaponi metal plant 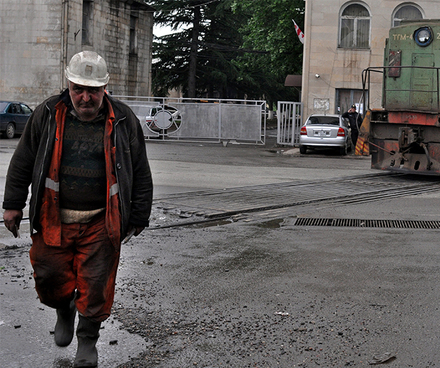 TBILISI, DFWatch–A 50-year old man died last Tuesday night at the ferroalloy plant in Zestaponi as he was hit by a high voltage electric shock.

Mamuka Nebieridze died on the spot in the June 3 accident. An investigation has been launched in order to determine whether anyone was to blame. Nebieridze was electrician at the first department of the plant.

Trade Union representatives asked the management of the plant to create a commission to find out what happened and include the trade union’s labor inspector  in the process, but the company has not yet responded, nor made any official comments about the accident.

A few days before the accident, DF Watch visited the ferroalloy plant in Zestaponi. We weren’t allowed in, but met with some of the workers, who spoke to us about problems at the plant.

They told us most of the accidents happen because they are working eight-hour shifts, which is dangerous because it makes them exhausted.

Giorgi, a worker at the plant, says most fatal accidents happen due to faulty machines and incorrect orders. Workers explain that the ore shouldn’t be put into the oven while it’s wet, as the water causes explosions and workers might get burned and in some cases die. But it often happens that wet ore is put into the oven and safety measures are ignored.

Workers at Zestaponi’s Ferro factory say nothing has changed since Soviet times. When equipment breaks down, it is repaired on site; the company never replaces machinery at the plant.

Goga Bregadze, who is head of Imereti trade unions, says that administration must provide the plant with new equipment, which will cost more than USD 40 million. If the company doesn’t do that, the fine for this is only GEL 10 000 (USD 6 000).

“What do you think the administration will choose to do? That’s why the government should be tougher in setting such obligations,” he says.

The first problem, which about 30 workers told us, is that the drinking water at the plant is polluted. It has a bad smell and taste.

“We have addressed the administration several times about this issue. They don’t admit that the water is bad but claim it is good,” one of the workers said. “Then we invited representatives of the National Forensic Bureau, which concluded that the water doesn’t comply with standards.

Davit says they don’t get paid extra for working overtime and don’t get 15 days of vacation, which they have a right to according to the collective agreement.

All the workers we met say that the level of visibility at the plant is very bad due to dust, which is dangerous for their health.

There are about 2,300 employees at the plant. The average salary is 750 lari (USD 420). Workers have a collective agreement with the administration, which was result of a strike in 2013, but they say the administration doesn’t fulfil 90 percent of the conditions in the contract.

“The government was promising a new labor code in the election campaign, but we had to go parliament and demand it again,” Davit says. “Now we hope that there will be created a labor inspection.”

The labor inspection was abolished by the previous government due to a high level of corruption and nowadays there is no government body that checks safety standards at work places.

Despite the dangerous conditions, workers in Zestaponi say they have no alternative but to work at the plant.