Georgia to cut troop numbers in Afghanistan to 700

Georgia to cut troop numbers in Afghanistan to 700 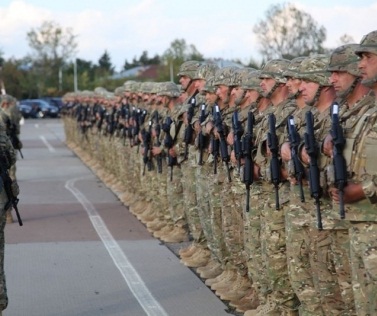 Georgian soldiers preparing to leave for Afghanistan in March, 2013. (Ministry of Defense.)

TBILISI, DFWatch–Georgia is reducing its number of troops in Afghanistan from January 1, 2015, to 700, Mindia Janelidze, Chairman of the Council for State Security and Crisis Management (CSSCM), announced Sunday.

Defense Minister Irakli Alasania, who participated in the council meeting, told journalists that a gradual decrease in the number of Georgian soldiers “is fully in accordance with the policy of the US and NATO to gradually reduce their military presence in Afghanistan. We have had consultations with with our colleagues from NATO and the US, and Georgia will from January, 2015, change the format of its Afghan mission.”

He said, from 2015, a maximum of 750 Georgian troops will serve in non-combat missions in Afghanistan, while Mindia Janelidze, the CSSCM chair, put the number at up to 700.

Georgian troops were deployed to Afghanistan in 2004. Early on, only 50 Georgians participated and were under German command. The number of troops has been increasing ever since, and in October, 2012, it reached 1,600 – the largest contribution of any non-NATO member state.

Currently two Georgian battalions, comprising 700-750 troops each, are deployed in Afghanistan – one in Camp Leatherneck in Helmand and a second battalion is deployed in Kandahar province. These are the two most dangerous provinces for allied forces, especially Helmand.

29 Georgian troops have died while serving in Afghanistan. Just over a year ago, on June 6, 2013, seven Georgians died when a suicide bomber set off a truck full of explosives nearby a small isolated vanward base of Georgian troops in Helmand.

The decision to reduce the number of troops in Afghanistan was made during a meeting of the CSSCM, which is an advisory board for the prime minister and comprised of representatives of the ministries of defense, internal affairs, foreign affairs and finance, and members of parliament. Parliament Speaker Davit Usupashvili was also present at the meeting.

CSSCM was established in December, 2013, and is fully under the control of Prime Minister Irakli Gharibashvili. The army, on the other hand, is under President Giorgi Margvelashvili as Commander in Chief, even taking into account the constitutional amendments of 2010 that drastically diminished the president’s power.

In the context of the tug 0f war between the president and the PM, the fact that this decision was adopted by the CSSCM, i.e. by Gharibashvili, means another blow to the authority of president Margvelashvili.

The president, as commander in chief, has his own advisory board – the National Security Council – which concerns itself with the defense and security issues.

When CSSCM was established, it was announced that it would not duplicate the activities of the National Security Council and that it was to handle crises, such as natural disasters.

Now, it is evident that the most vital decisions regarding defense and security have been stripped from the authority of the president and gone into the hands of the prime minister.