One Caucasus Festival kicks off near Marneuli

One Caucasus Festival kicks off near Marneuli 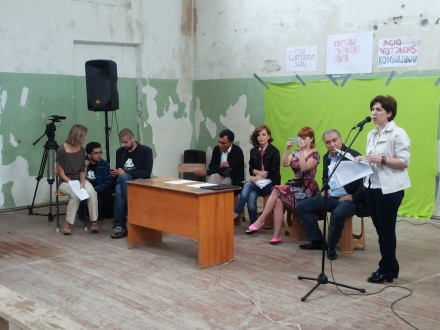 One Caucasus Festival kicked off yesterday in Tserakvi in Marneuli district, turning the tiny village into a lively melting pot of local and international guests.

The festival will last for three days. While it certainly attracts many visitors for its musical programme, including artists from the South Caucasus, Poland, and Senegal, there is a strong family-friendly dimension to the festival, such as sport, dance, and art activities for children and teenagers, which proves very popular among the local community.

‘The idea for the festival was born in 2012 while working on our previous project “Art Zone” in Kakheti, which was aimed at spreading the Polish culture abroad. Within the project’s framework, we conducted meetings with representatives of intelligentsia from Armenia, Azerbaijan, and Georgia. While implementing the project together, an idea was born: it would be good if young representatives of the three republics — neither politicians, nor historians, nor philosophers — worked together on preparing a music festival.’

While Marneuli district is predominantly inhabited by ethnic Azerbaijanis, the area around Tserakvi is a patchwork of ethnic Armenian, Azerbaijani, and Georgian communities. The location was also chosen due to its proximity to both Armenia and Azerbaijan.

‘In 2014 we organised the first One Caucasus Festival. We chose this region because of the ethnic diversity and its proximity to the borders of Armenia and Azerbaijan. It is easier for young people to travel here, it is easier to disseminate information, and it is easier for us to create an apolitical zone in order to foster their cooperation and friendship’, Mr Mextiyev continues.

‘For our workshops we create groups. Within each group there is a representative of every nationality: a foreigner, a local Armenian, a visiting Armenian, a local Azerbaijani, a visiting Azerbaijani. Such groups work together for 20–25 days on their specific project, such as filming, drawing, helping schoolchildren, etc.’

In future, the organisers are planning to expand the festival so it includes the population of both the South and the North Caucasus and lives up to its name of ‘One Caucasus’. Attempts at engaging Georgia’s breakaway republics have also been made, yet failed so far due to ‘political issues’.

‘We have grand plans for the future of the festival. If we have means, we’d like to include the population of Abkhazia and Samachablo [South Ossetia] as well as the population of the North Caucasus. We’re trying to include everyone. (…) This year we already have participants from Russia. It shows that there is a potential to include more participants from Russia, especially from the North Caucasus’, Mr Mextiyev concludes.

The festival is co-funded by Marneuli municipality and the Ministry of Culture and National Heritage of the Republic of Poland.