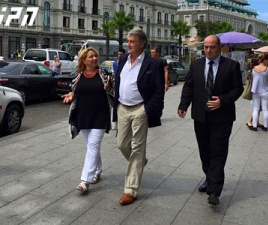 Yushchenko, who became famous as one of the leaders of the Orange Revolution in 2004, is accompanied by his wife and not visiting in any official capacity.

News agency Interpressnews caught up with him a he arrived at a friend’s party.

“Amazing people, amazing city, parks. I haven’t seen such beautiful Batumi in the past,” he said, adding that he is leaving Georgia on Friday.

Viktor Yushchenko was president of Ukraine from January 2005 to February 2010, after winning a new election called following massive demonstrations against election fraud.

He was many times hosted by his Georgian colleague Mikheil Saakashvili, who came to power after the Rose Revolution in 2003, and the two became good friends, once pressing grapes together at Saakashvili’s vineyard in Kakheti, in eastern Georgia.