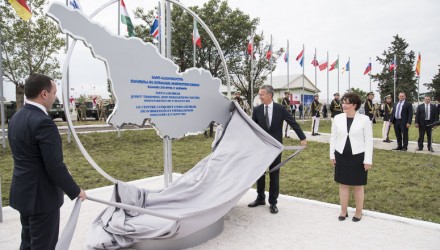 The centre is located inside the functioning military facility at Krtsanisi settlement, in Tbilisi south-eastern outskirts.

Georgian Prime Minister, the President, the Speaker of Parliament, Defense and Foreign Affairs Ministers and other officials attended the ceremony.

“There is more Georgia in NATO and more NATO in Georgia,” Jens Stoltenberg stated. “And all these efforts help Georgia to move closer to your aspiration of NATO membership”.

He lavishly praised Georgia’s reforms, calling it “an example in the region and beyond,” adding that “Euro-Atlantic integration is not an easy road; it takes time, determined efforts and real change” and  “NATO will continue to stand by Georgia.”

The training centre is part of a substantial package, which Georgia received from the alliance during the Wales Summit instead of the long-expected Membership Action Plan (MAP).

Irakli Garibashvili, Georgian PM, said after the meeting with Secretary General on Thursday that Georgia is committed to retain pragmatic and constructive approach to Russia, thus responding to the question whether a threat is expected from Russia after opening the center. The Kremlin vehemently opposes any moves by NATO in former Soviet countries.

Garibashvili explained that the centre aims at developing qualification and professionalism of the military and is not conceived against any state, i.e. Russia.

“On the contrary, I think it will help to strengthen Georgia’s armed forces. It will contribute reinforcing regional security,” he added.

“It is not directed against anybody; on the contrary, the centre will be important to improve regional and international stability,” Jens Stoltenberg stressed.

Less than a week before opening of the center James Appathurai, NATO Deputy Assistant Secretary General for Political Affairs and Special Representative for the Caucasus and Central Asia, remarked that having a joint training centre is a sign for cooperation and partnership with Georgia.

“NATO does not perceive the joint Georgia-NATO training centre as an anti-Russian center or as a gesture, a move made against Russia, or as a signal to Russia,” he said.

Secretary General said during the opening ceremony that the centre would also be important place to train allied and partner troops and both Georgian and allied experts will work to draw ‘maximum benefits possible’ from the center.

“Of course, the centre will be more than this building and its offices. It will include training sites and ranges all across Georgia,” he said.

“First and foremost, this centre is a testament to the dedication of the Georgian women and men in uniform who have served side by side with NATO soldiers. Including those who have lost their lives, or been injured, in those operations. We pay tribute to them.”