Number of hospitalized after wedding poisoning scandal rises to 40

Number of hospitalized after wedding poisoning scandal rises to 40 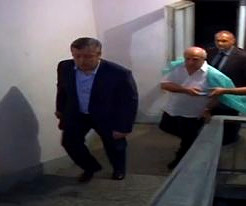 PM Kvirikashvili visiting some of the poison victims at Marneuli hospital on Tuesday. (Interpressnews.)

TBILISI, DFWatch–About 40 people – 22 of them children – are still in hospital after being poisoned during a wedding in Georgia.

Nearly 200 people were poisoned on Monday at a wedding in Sadakhlo, a village in the south of Georgia near the border with Armenia.

The National Food Agency is studying what happened and does not yet know the source of the poison, but has temporarily shut down the restaurant where the wedding guests were poisoned.

Results of samples that have been taken will be published in one week. The agency is examining 13 different food and drinks.

The agency fined the entrepreneur Samir Karajayev for ‘critical discrepancies’ discovered during an unannounced inspection of the restaurant.

The Ministry of Internal Affairs is also investigating the mass poisoning as a case of producing or selling a product which caused harm to people’s health.