No signs that Mokhe commission has done anything yet

No signs that Mokhe commission has done anything yet 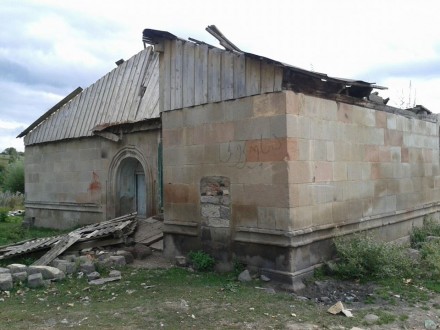 TBILISI, DFWatch–The conflict between Christians and Muslims continues in a village in southern Georgia. A commission created in December to solve the dispute appears to have done nothing so far.

Muslims in Mokhe demonstrated in February against the appointment of a new police chief for their village. Interpressnews quotes people who say they remember the policeman as hostile to Muslims in the past.

But despite the ongoing conflict, the commission created specifically to help solve the problem has not made any public statements since December.

The dispute circles around a building in Mokhe that officially has status as culture house, but local Muslims and Orthodox Christians each claim it was a mosque or a church in the past, respectively.

When the local government declared it a culture house, the Muslim population began protesting, which was followed by counter-protests by radical Orthodox Christians.

A few weeks ago, the Public Defender asked the State Agency on Religious Affairs for the second time to allow him access to the work of the commission, as an observer.

The ombudsman published a letter from the agency that says it is the obligation of the commission to study the Mokhe issue in an historical context, not as an issue about property rights or freedom of religion.

The agency claims that scrutinizing the activity of the commission goes beyond what the law says the Public Defender should be working with. The letter further says that majority of members of the commission are not public figures and it is not a public entity. The letter ends saying that due to the great public interest in the issue, the agency, as one of the member of the commission, is not against allowing the ombudsman to be observer.

The Public Defender believes that events which took place in Mokhe can be intervention in freedom of religion, threat to social peace and co-living between the Orthodox Christian and Muslim communities and since the ombudsman is entitled to monitor the situation in terms of human rights, he believes it is necessary that he gets involved in the process as an observer.

The agency has not provided the ombudsman with copies of documentation regulating the work of the commission, despite an official request for such documentation.

“The Public Defender of Georgia continues to study the issue of the disputed building in the village of Mokhe in Adigeni municipality and once again expresses his readiness and interest in engaging in the work of the Commission with observer status,” the statement reads.

The commission has four members from the Muslim community, three from the Georgian Patriarchy, two from the local government in Samtskhe-Javakheti, two from the Cultural Heritage Protection Agency and one person who represents the agency on religious affairs.