Activists rally in Tbilisi to demand women’s quotas in politics

Activists rally in Tbilisi to demand women’s quotas in politics 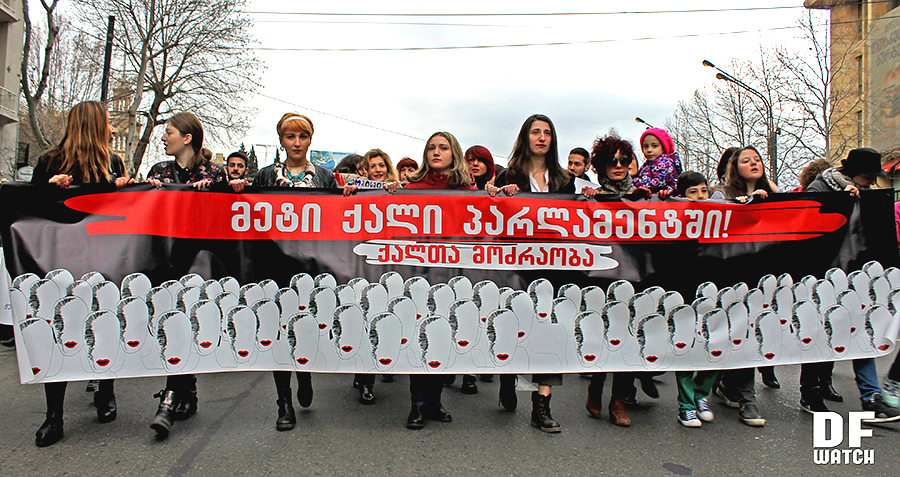 On March 8, they organized a public rally in Tbilisi and  24 other towns and cities to demand more women in politics in Georgia.

“The Georgian parliament lacks representational democracy, women’s interests are neglected and we are not willing to adjust to the system any longer,” the group wrote.

In the capital, a few hundred people marched down Rustaveli avenue asking for a gender quota system which would ensure more women in the Georgian parliament.

One of the GWM leaders, human rights lawyer Baia Pataraia explained to DFWatch that they strive to have a gender quota introduced in party lists. The idea is to have women politicians listed as every second candidate in every proportional party list, thus guaranteeing that 38 out of the 150 seats in the parliament – 25 percent – go to women.

At the moment, there are 17 women MPs. The graph below illustrates the percentage of women MPs since 1991, and is based on data from UNDP research on gender equality and perception in Georgia conducted in 2013. 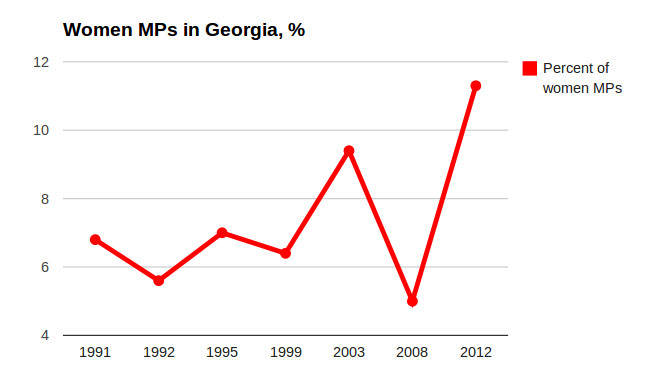 Despite the growth in the proportion of women MPs since 1991, the share of women in the assembly is still only 11 percent, a number which puts Georgia in 106th place out of 190 countries in terms of percentage of women in the national legislative body.

Out of 17 women MPs, 12 are in the ruling coalition and 5 in the opposition. Only 1 out of 15 parliamentary committees is chaired by a woman, and 5 committees have a woman as their deputy chair. Also, just 3 out of 20 government ministers are women.

According to GWM, women comprise only 11 percent of local council members all over Georgia, and this number hasn’t changed in decades. In Telavi, Mtskheta, Tsalka, Aspindza and Poti there is not a single woman in a local municipal assembly, called sakrebulo. And only one municipality out of 59, Tianeti, has a woman as administrative head, so-called gamgebeli. There is not a single woman mayor or governor in Georgia.

Despite growing visibility of feminist activism in Georgia, politics is still perceived as a men’s playground with almost no place for a woman.

Already mentioned UNDP research on gender equality and perception in Georgia revealed that Georgians do not see politics as a place for a woman. Firstly, she is seen as a weaker person than a man, because she is more emotional, and politicians should be more firm. Also, the main domain of a woman is her household, thus she is perceived to be too busy with her household chores to be an active participant in politics. For these reasons, a woman cannot count on her social circle’s and her spouse’s support if she decides to pursue a career in politics.

According to UNDP, it all boils down to traditional gender perception, when a woman is seen as an obedient caretaker of the household and the family, and meanwhile a man is career-oriented and takes care of the family’s finances.

And if a woman nevertheless decides to go into politics, she’s expected to be in health care, culture, environmental protection, conflict resolution, social problems or women’s rights spheres or serve in a diplomatic mission. At the same time, men are considered to be able to achieve success in every sphere of politics.

Pataraia told DFWatch after the rally that these numbers are a sign of social change and that people are ready for gender quotas and more women in politics.