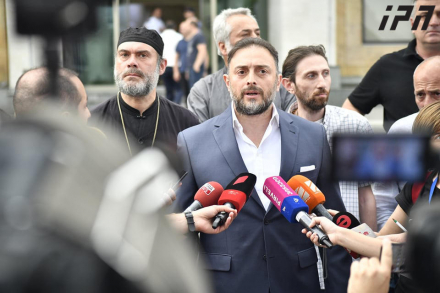 TBILISI, DFWatch–At least nine people were detained by police in Tbilisi at as defenders of LGBT rights clashed with conservatives on Friday.

The police had to set up barriers between the two groups of protesters in order to avoid a physical confrontation.

The LGBT activists gathered at the government building Friday evening to protest its failure to protect planned events of Tbilisi Pride.

Immediately there started to appear radical groups that launched a counter rally. Several clergymen were accompanying them. The counter rally was led by members of Georgian March and supporters of Levan Vasadze, a radical conservative millionaire and public figure.

The event was preceded by a strong-worded statement by the Patriarchate, the ruling body of the Georgian Orthodox Church, denouncing the upcoming Pride. 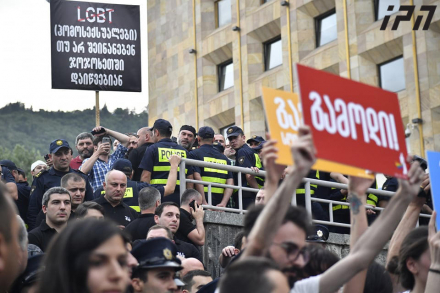 LGBT rights activists and radicals (above) were kept apart by police outside the government building in Tbilisi. (Interpressnews.)

In its statement, the Patriarchate warned foreign diplomats and international organizations.

“We urge you and ask the embassies, international organizations, the public defender and other institutions accredited in Georgia to show a more cautious approach to this issue, which is very sensitive for Georgian people, and to not encourage similar activities in our country; By doing so, they will promote civil peace and show their respect for our population,” the statement reads.

At the counter rally, Levan Vasadze also lashed out at foreign embassies whom he and other radical accuse of funding and supporting the LGBT movement.

“No matter how many ambassadors interfere in our country’s internal affairs, no matter how much pressure they exert on our society, we shall not allow the celebration of an anti-Cuacasian, anti-traditional way of living, and those who propagate filthiness,” Vasadze said.

LGBT rights activists vow not to leave the scene until the government denounces the violence and “acknowledges our rights”.