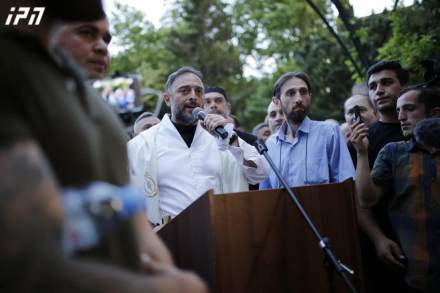 Levan Vasadze (center) addressing his supporters at the rally. (IPN)

“We’ll establish people’s squadrons. […]  Among the crowd gathered here there are a lot of individuals with military experience, a lot of athletes, rugby players, and wrestlers,” Levan Vasadze said at a gathering of conservative activists in Tbilisi center on Sunday evening.

We shall not allow the “propagandists of perversion” to carry out a march here, he said, waving a cross and wearing traditional apparel.

“We will tie their hands with belts and take them away,” he addressed several hundred supporters and asked them not to resort to physical violence.

Vasadze, who strives to further the rise of radical conservatism in the country (for a recent study, click this link), also warned the police not to interfere, otherwise, he cautioned, they will be pushed off. He called on the crowd to bring wooden clubs  in order to confront the police.

Levan Vasadze was a key figure at the counter-rally few days ago, which confronted a small group of rights activists who held a rally in front of the government building to protest its failure to protect planned events of Tbilisi Pride.

The LGBTQI community and civic activists plan to hold Tbilisi Pride on June 18-23, which includes various events, including a march.

On Saturday, the police issued a statement vowing to step up the fight against hate crime in the country.

“We would like to inform the society that the fight against crime committed on the grounds of a discriminatory motive and their effective investigation is one of the priorities of the Ministry of Internal Affairs of Georgia. This kind of violence and threat of violence on the grounds of this motive is unacceptable. The Ministry has responded to every incident  and will respond in the future as well. Every incident of such offenses will be immediately prevented,” the statement reads.